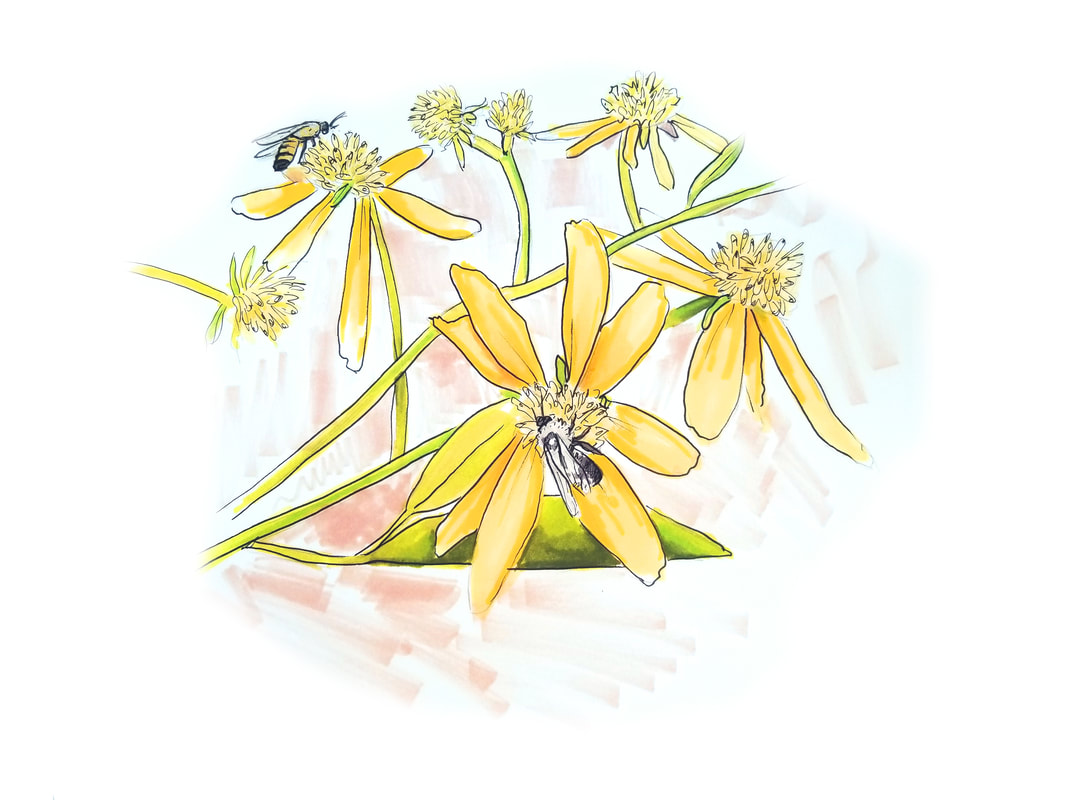 ​One of the most interesting things that I saw during our trip to Green Acres was this, a honey bee and a native bee both looking for nectar on the same group of flowers. Both helping to pollinate the flowers so that they will be able to reproduce and continue to grow next year. While the native bee doesn’t support monocultures as efficiently as the honey bee, they still pay a vital role in our ecosystem. This also relates to the trip to Live Well Collaborative, where they talked about how to make the radiology process easier for patients from arrival to departure. While this isn’t nearly as important as the actual treatment itself, it still plays a vital role in the treatment process. I think that is something all designers need to consider, those smaller, but still vital ideas.

Going into this project, I was actually incredibly nervous because I have never 3-D printed a project before, so I knew my group would have to think out of the box. We created the bee using a wooden body, hinged together, with 3-D printed legs and wings, and wire stinger and antennae, then finished by painting with acrylic paint. This project was really interesting because I was forced to think about something outside of the norm, how to redesign an animal. It makes me think about humans, how we think about ourselves. Ask almost anyone, and they will tell you at least one thing they want to change about themselves. Bees aren’t like that, they spend their days supporting the hive. However, bees will have to adapt due to the changing environments and roles that they play within human society. Because of the Veroa Mite, we made a hard ridged exoskeleton on it’s back to protect its bloodstream. This is one of the biggest factor’s harming the honey bee, the risk of infection due to bacteria and other diseases, both caused by the mite and other pathogens. Because of this, another change we made was honey deposits within the bees body, to be released through its front legs to allow the bee to clean themselves. Honey is antibacterial, and we allow them to stay healthier. The last thing we changed was the stinger, which we made retractable. This is beneficial because it keeps them from dying during a sting. Overall, while these changes might not be realistic within the next hundred years, hopefully with existing technology, we can find a solution to the honey bee crisis. With this project, I am glad that I got to learn different skills, like 3-D printing, and applying skills that I already had, like painting.

​Initially, when it was announced we were going to be having a fishbowl discussion, I was dreading it. Something about having a bunch of my classmates stare at me while I awkwardly discuss a topic just doesn’t seem to sound appealing. But our first fishbowl discussion turned into more of presentations, rather than an actual discussion. Still awkwardly discussing a topic, but at least I could do so with the benefit of a slide in front of me. Each group approached the subject a little differently, based on the book. For the fiction books, it was more of a discussion of plot and circumstances, while the non-fiction books discussed facts and figures. Being in a fiction group, I felt like I did not learn about the actual life of bees and beekeepers as the other groups did. However, our group gained insight into a possible future, without bees, which I think made the matter seem more dire.

Personally, I find fishbowl discussions very frustrating to watch. There were multiple points where I wanted to interject, or where I felt they were discussing the wrong information, but the point is for me to be a silent observer. For example, when the first group began talking about capitalism as a whole, and it became heated, I became uncomfortable (but I mostly blame that on my anti-conflict tendencies). For the second group, which I was a participant in, I feel like we did the best job of discussing every point as it related to our class, and we each brought in evidence from the class to support it. That being said, I’m not sure the observer’s would feel the same. The last group definitely had it the hardest, because arts-based research is a difficult concept to even understand, let alone discuss for 25 minutes. But they impressed me on finding good arguments to support what they were thinking, and began speaking speculatively, which in design terms, means thinking beyond what we can directly comprehend.

Overall, I will say I did learn from these activities, if for nothing other than the information we presented to each other during the first discussion. Each group having a different book meant that we were able to look at the problem of bees from different perspectives, which I can really appreciate. And then having different discussion points meant that we could all analyze different parts of the class.

There is a need to reinvent the perception humans have of the honey bee towards one built on empathy and interest. The development of an empathetic view on honey bees is critical to facilitate the protection and growth of the species. Our group used a hands-on approach geared towards children to develop an educated foundation of bee knowledge. We found that interaction with subject matter is increases the learning experience, inspiring the creation of an interactive and informative exhibit which may be used in a variety of settings.
​

A Day in the Life of a Bee

For our final project, our group chose to focus on the human stigma about honey bees. To better educate people, we decided the best group to target was children, whose experiences can shape the rest of the life and their perceptions. The strong foundation for solving any of the world’s problems is education: the more people know about a problem, the harder it is to ignore.

In our research, we learned that interaction is key for better absorbing information. So we created a hands on exhibit that is easily accessible and movable to better accommodate smaller locations, such as schools and classrooms, public libraries, etc. It is also accompanied by a children’s book, something that could be left with the classrooms or libraries, or could be sold so that the kids could take the book home.

Our group each had different areas that we focused on. The student who was biology major focused on a lot of our research, while the architectural engineering major focused on 3-D modeling. We all focused on different parts of the exhibit, and I made the coordinating graphics, exhibit layout, and book to tie it all together.

Some of the coolest parts of the exhibit are a vinyl print of the waggle dance to be placed on the floor, a VR headset to see in ultraviolet like the bee can, and a wearable Varroa Mite. 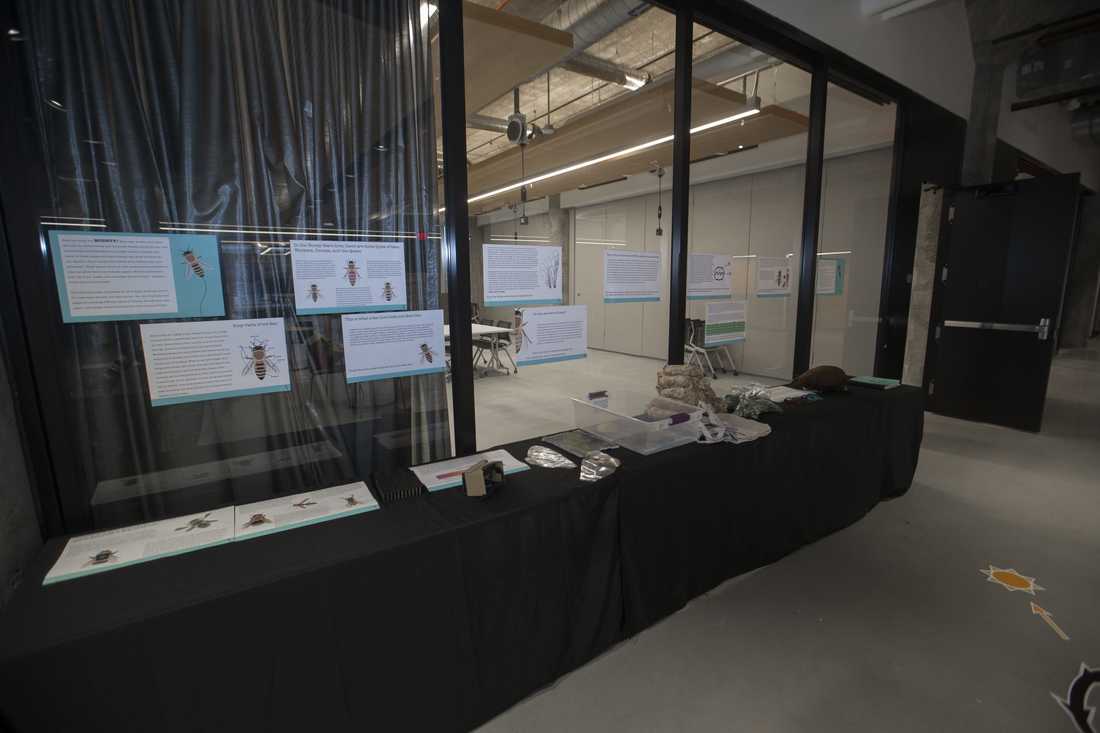 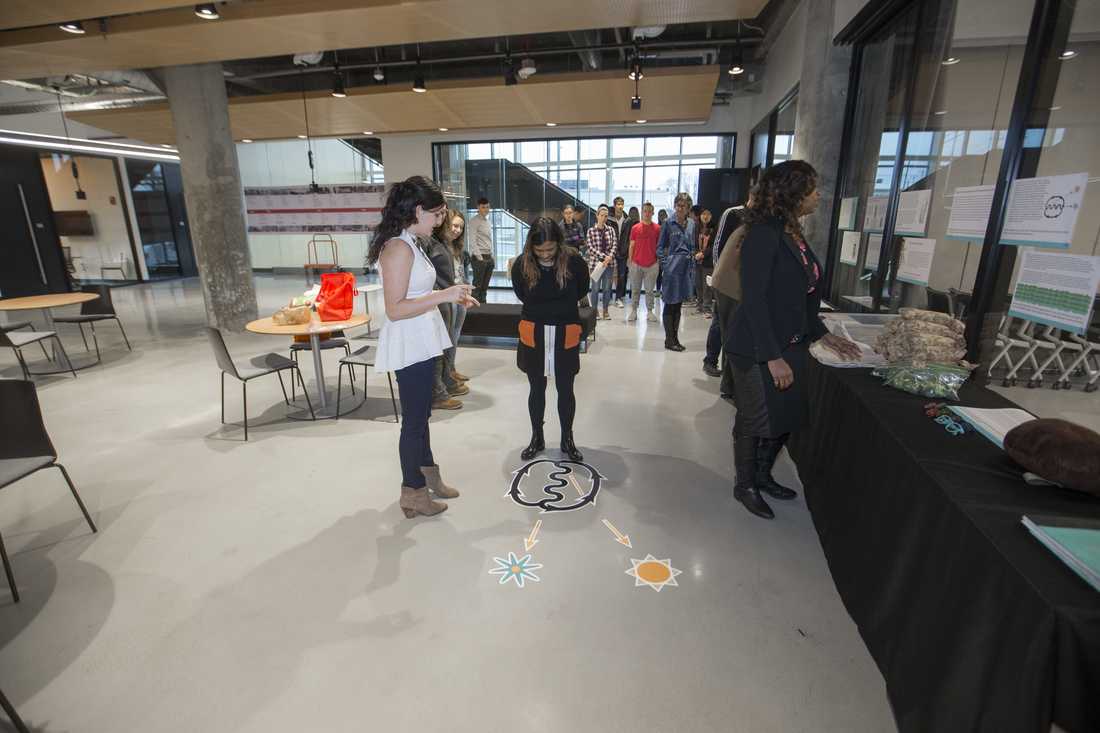 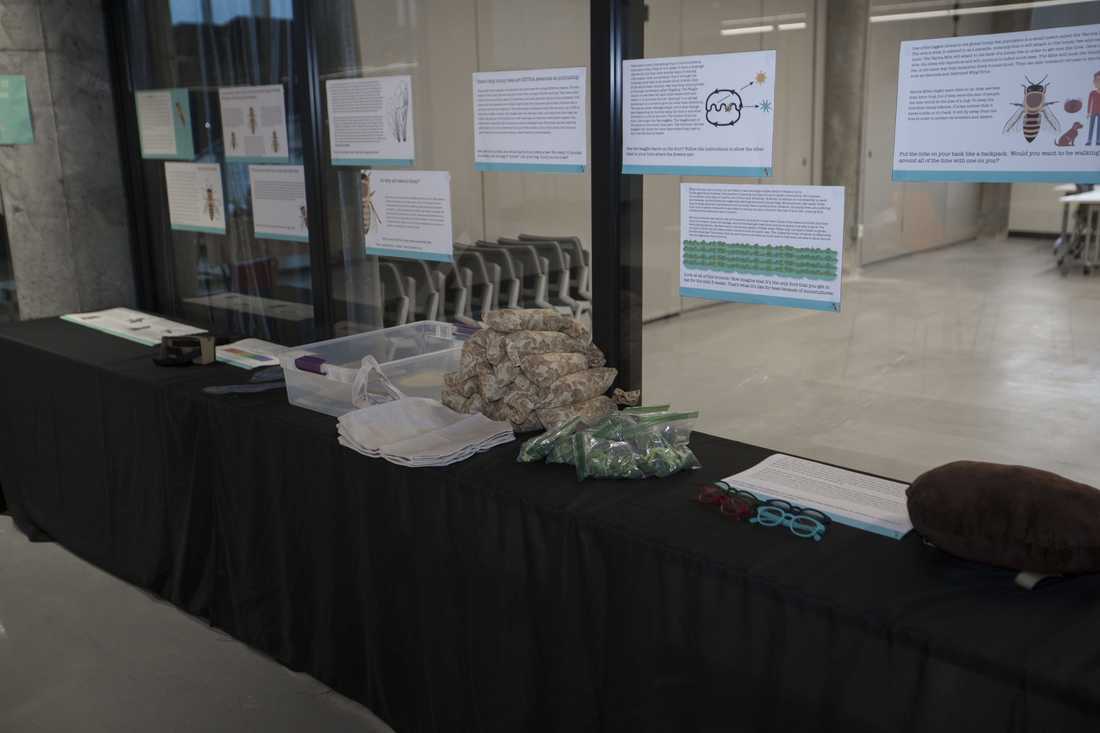 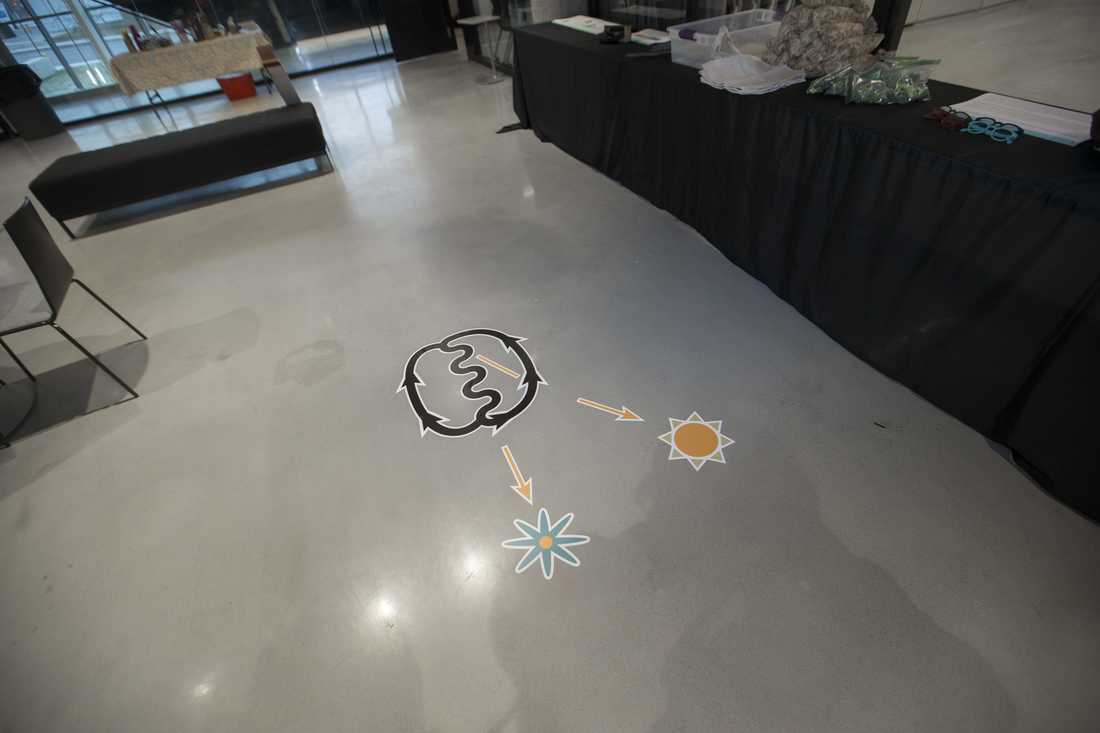